I wrote this last June:

AUDJPY: Are We Heading For An Extended Period Of Risk Off Behavior?

• AUDJPY, if it hits the target I have outlined, signifies that we would likely be in recession.

• Japanese yields steepening putting downside pressure on the pair in the long run.

I use AUDJPY heavily to assess risk sentiment, since AUD is very sensitive to economic conditions surrounding production (more demand for iron ore, copper, etc., means higher GDP, construction indicators, overall happiness) while yen is bid during periods of uncertainty. I have been watching and waiting to see what price does around the ¥80-86 mark.

For me, the future looks quite bleak for the pair.

Take a look at the monthly chart below.

Firstly, note the top blue rectangle. Price has tested and retested the financial crisis high and has fallen off pretty harshly. This supply has been consumed, and for me, this indicates that the upside of the overall structure is exhausted. From my experience, the probability of the support structure breaking and heading lower is very high.

We’ll look at this on the below candlestick chart.

The blue zone has been touched 5 times now with no price breakthrough.

The 2010 low of the range ¥71.91) is still very much intact. What is vital to understand here is that longer term traders are likely to still have stops under this support level.

The market is going to want to target these if we start to probe around ¥72-75. If the conditions would allow, then we could see a slip to ¥68-¥69 and an upside retest of that ¥70 level.

Now, speaking of conditions, Japan’s monetary policy has been relatively unwavering – there has been stability from the BoJ and in terms of being a risk off currency, this is hugely attractive to traders looking for safety or a long term position trade (the only problem with shorting this is that carry will be paid when holding a position overnight).

One aspect that you can add to being bearish AUDJPY is that the Japanese 10YY is pushing to above 0% again.

The BoJ are also looking to steepen the long end of the yield curve in order to satisfy Japanese financial institutions.

It is also mentioned that the Japanese may pursue ‘stealth tapering’ so as not to affect the financial markets akin to the US in 2013.

This can provide certain confidence to traders being long yen vs. commodity backed currencies such as the Aussie.

Below is Chinese GDP.

Remember previously I said that the Aussie is heavily affected by productive demand? China is a huge importer of Aussie copper, gold and iron ore.

China is Australia’s best customer with $45bn being exported there annually. China is currently experiencing a slowdown and I do not believe the full effects are yet apparent, not just in the Aussie, but globally (Chinese credit bubble in the shadow banking sector has been named one of the biggest tail risks to the financial system).

If the Chinese slowdown proliferates, then I’d expect certain effects on the Aussie long term.

Note the first chart again. I think it’s important to note what occurs to AUDJPY during downturns.

The head and shoulders target measure of taking the length of the neckline to head, and mirroring that from the neckline to the downside identifies that ¥50 is a potential target if the support at ¥70 breaks.

I’d be almost certain to argue that we would be in a recession if this were to occur if we examine history, and history, in the end, does repeat itself especially in the financial markets. 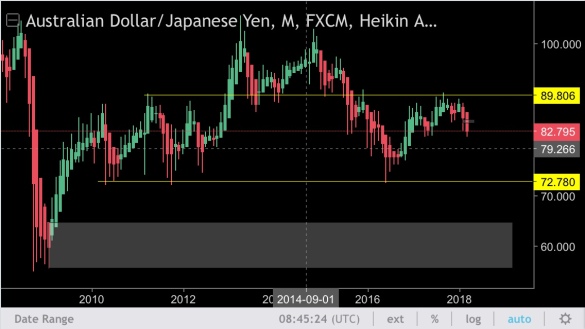